NEW ORLEANS (Gazette) — No you didn’t? Yes they did. The N. Koreans say that President Obama is a monkey. Amidst mounting threats of sanctions from the U.N. for human rights violations, the N. Koreans have verbally attacked Obama and S.Korean President Park Geun-Hye whom they called a whore.

I was too surprised to see on CNN News on Tuesday night quotes from N. Korea calling President Barack Obama a monkey, and S. Korea’s President Park Geun-hye a whore and a prostitute.

I do not think that Presidents Obama and Park will stoop to being swayed by N. Korea’s vitriolic use of such childish language. However, in a related story, the United Nations plans to file human rights charges against N. Korea and wants to see Kim Jong Un in handcuffs being led away to prison. My only question is: how will they get past Kim Jong Un’s nuclear arsenal in order to slap a pair of handcuffs on the lunatic’s wrists?

@AlastairGale >>I read more of their insults at the #HuffingtonPost. The #RedButt quote about his red butt was awful http://t.co/cEY6QJdcdy

Update: Below is a translation of part of the article. It is a picture of the Korean news piece which does not display the whole story. The translator left some particularly difficult phrases in the original Korean. My hope is that I will soon find an upgraded translation of the whole article.
2014-05-09 at 10.50.06 PM, the translator said:
In the KCNA editorial quoting the North Koreans, we see the same language used as the North Koreans heat up their sexist attacks on Presidents Obama and Park. – See more at: http://freekorea.us/2014/05/07/really-north-korea-called-president-obama-a-wicked-black-monkey/#sthash.aXa5gTcN.dpuf 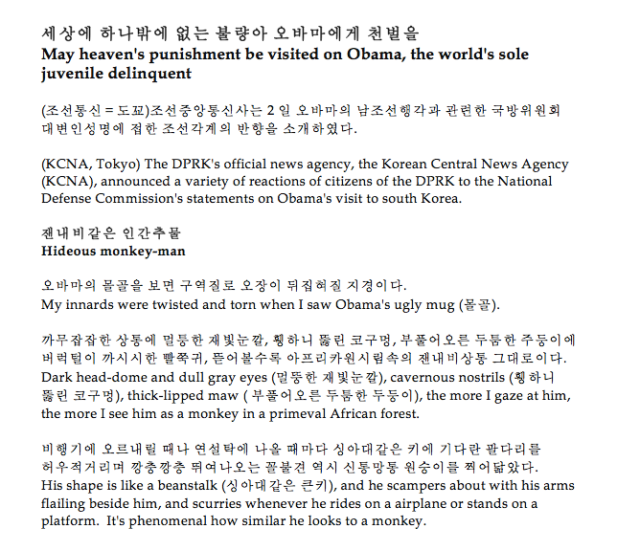 This is only part of the photograph.

I will explain this video later. It reminds me of an Ann Margaret video that I have.